By that time, IFS housed a well stocked library with a broad collection of documents on ferrocement, comprising practically anything published on the subject worldwide, starting in the late 1940’s.  That included unique files documenting for instance the construction of a particular ferrocement boat (many from New Zealand, Canada, and the UK) or a housing structure.  History would likely affirm in the future that the onset of the third millennium was not kind to ferrocement.  IFS encountered several difficulties; key board members who were working at AIT in Bangkok, retired.  Shortly thereafter,  AIT cut off funding and closed the physical facilities of the IFS and its right arm, the International Ferrocement Information Center (IFIC) which were dedicated to other activities.  The entire IFS library (documents, journals, reports, photos, digital files, etc...) was moved to the concrete laboratory on the ground floor of the AIT campus.  Unfortunately in 2011, the whole collection was destroyed in the great flood that hit Bangkok.  Undeterred a number of IFS members decided to join resources to share all personal documents they had on ferrocement and digitize them so they can be available for future generations. Paul J. Nedwell, from the University of Manchester, UK, spear-headed that activity.  The digital files thus generated are now among the free downloadable files from this web site.

So far, IFS has acted mostly as a learned society for the benefits of all including the public at large, with particular attention to the less fortunate portion of that public. It can be best viewed as the result of an expression of love, faith, enthusiasm and commitment by a combination of researchers, academics, amateur builders, and businesses who believe in the benefits of ferrocement.  As of 2017, IFS is a legally approved non-profit charitable organization in the state of Florida, USA. 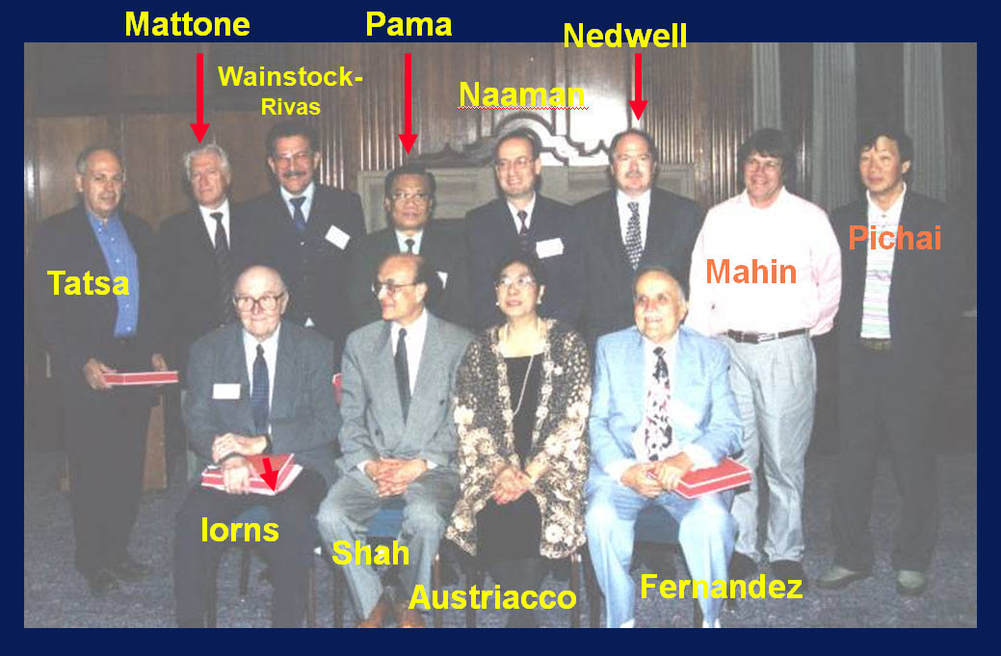 Some members of the International Ferrocement Society during the Ferrocement-6 Symposium at the University of Michigan, in Ann Arbor, in 1998.

This section is essentially taken from the book on Ferrocement by Naaman (see Books in Publications page).

​​The initial definition of ferrocement can be drawn from a patent application submitted by Joseph-Louis Lambot of France, in 1852.  The patent for "fer-ciment," which translates into "iron-cement," contained the following description:

"My invention shows a new product which helps to replace timber where it is endangered by wetness,
as in wood flooring, water containers, plant pots etc... . The new substance consists of a metal net
of wire or sticks which are connected or formed like a flexible woven mat.  I give this net a form which
looks in the best possible way, similar to the articles I want to create.  Then I put in hydraulic cement
​       or similar bitumen tar or mix, to fill up the joints."
​          Lambot built two rowboats in 1848 and 1849, in length respectively about 3.6 m and 3 m (12 and 9 foot), 1.3 m (4 ft) wide and 38 mm (1.5 in.) thick, and disclosed his patent at the Paris exhibition in 1855 by showing one of the boats.  The first boat is now at the Brignoles museum in France.

Ferrocement can be considered the first application and the very origin of reinforced concrete.  As early as 1849, it seems that Joseph Monier, working independently of Lambot, started building for the city of Paris, France, flower pots and garden tubs made out of cement and iron rods. Monier  took a patent in July, 1867, for "a system of movable casings and bowls made of iron and cement, applicable to horticulture."  Monier's work also can be considered at the origin of reinforced concrete.  An excellent review of the history of ferrocement is given by Morgan and Morgan in the proceedings of Ferrocement 6, the Sixth International Symposium on Ferrocement, dedicated to Lambot [see page on Symposia Proceedings].  The technology of the second part of the 19th century could not accommodate the efficient production of meshes, and small diameter wires were much more expensive than larger diameter rods. Therefore, larger diameter iron or steel rods were increasingly used, leading to a shift from ferrocement to standard reinforced concrete construction. Thereafter, reinforced concrete became the material of choice.
​
In 1887 a Dutch man, Mr. Boon, built a small craft of ferrocement, the Zeemeuw (or seagull) and several barges of reinforced mortar to carry ashes and refuse on water canals.  The Zeemeuw was reported to be still operating at the Amsterdam zoo in 1968. It is currently displayed in the lounge of the Vereniging Nederlands Cement Industries' office in Amsterdam.

During the First World War, ships and barges were built with reinforced concrete, and this was again attempted during the Second World War due to shortages of materials, particularly steel.  In effect, ferrocement was forgotten and replaced by reinforced and prestressed concrete.

However, in the early 1940’s, Pier Luigi Nervi, a noted Italian engineer-architect, revived the original concept of “ferrocement” by proposing that ferrocement be utilized to build fishing boats.  He pointed out that the distribution of reinforcing meshes in concrete produces a material with approximately homogeneous mechanical properties, capable of resisting high impacts. Following some preliminary tests on slabs, he showed that ferrocement possesses exceptional elasticity, flexibility, strength, and resistance to cracking.  He wrote: “The fundamental idea behind the new material “ferro-cemento” is the well known and elementary fact that concrete can sustain large strains in the neighborhood of the reinforcement and that the magnitude of the strain depends on the distribution and subdivision of the reinforcement throughout the mass.”  In 1943 ferrocement received acceptance by the Italian Navy.  Shortly after the Second World War, Nervi demonstrated the potential of ferrocement by building a 165 ton motor-sailor Irene using a ferrocement hull of thickness 35 mm (1.4 in.) which is slightly less than that of a wood hull. The Irene proved entirely satisfactory. Nervi continued his pioneering work by using ferrocement in some architectural applications, such as a storage warehouse, the roof of the exhibition hall of Turin (1948), the exhibition hall in Milan, and the roof of the Flaminio Stadium in Rome.  Most of these structures are still standing today.  The boats and structures built by Nervi were appreciated only two decades later, time at which the durability and serviceability of ferrocement could be ascertained by the profession.

Ferrocement finally achieved wide acceptance in the early 1960’s for boat building in the United Kingdom, New Zealand, Canada and Australia.  In 1968, the Fisheries Department of the Food and Agriculture Organization (FAO) of the United Nations started ferrocement boat building projects in Asia, Africa, and Latin America.  Other countries followed, including the Soviet Union, China, and several countries in South-East Asia.  In 1972, the US National Academy of Science formed a panel to report on the application of ferrocement in developing countries.  One of the recommendations of the panel was to establish a worldwide center to collect, process, and disseminate information on ferrocement.  Subsequently, in 1976, the International Ferrocement Information Center was established at the Asian Institute of Technology (AIT) in Bangkok, Thailand.  In 1975, the American Concrete Institute formed Committee 549, Ferrocement.  In 1991, the International Ferrocement Society  was established (under the leadership of R. Pama) with headquarters at AIT in Bangkok.

Today ferrocement is widely accepted and utilized.  Technical information on ferrocement can be obtained from the International Ferrocement Society (IFS), the American Concrete Institute, RILEM, IASSS and many national centers for ferrocement.  The Journal of Ferrocement, which was published at the Asian Institute of Technology in Bangkok, between 1981 and 2007, presented regular advances in research, application, and standards related to ferrocement.  The IFS hopes to act as a repository of all information related to ferrocement, including research, applications, guidelines, codes and other. It also organizes dedicated symposia on Ferrocement every three to four years, as well as seminars and courses where the science and technology of ferrocement are taught.